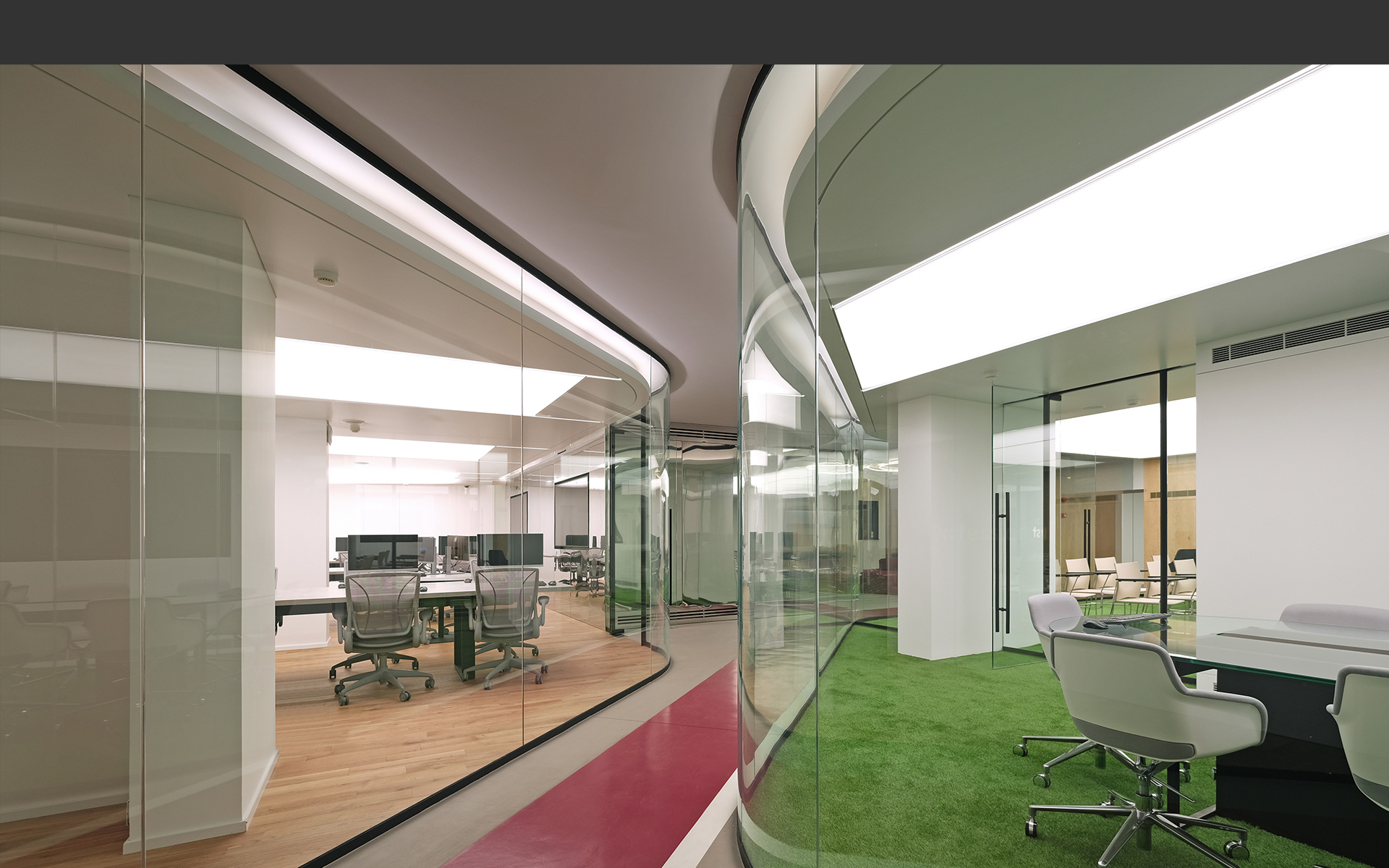 The new Saradar Training Center in Ashrafieh will house the bank’s Training Academy, within an already existing structure. The challenge was to reconfigure the existing space in a way that effectively expresses the creative and agile strategy of the bank, while accommodating various functions required in a training academy.   The proposal developed as an adaptive re-use of the existing, transforming it into a hub of activities.
The existing space has an eleven-meter street façade, with minimal openings, resulting in a rather dark interior, with very low ceilings. The challenge was to transform this interior into a vibrant, open, training center. The proposed design attempted to break free from the conventional, rigid, corporate model and rather provide a more flexible environment, allowing various working conditions, and the possibility of chance-encounters to take place.

The project was perceived as a journey along a track field, with a number of activities taking place along the way. The ‘Track’, a continuous loop within the space, is used both for circulation and spatial definition.  The journey begins in the main lobby, a double height communal space, flooded with natural light. A double level ‘living wall’, incorporates seating niches along one edge of the building. The communal space hosts a coffee station, informal gathering zone, booths, working tables and stairs that lead to the upper level.
Further along, the track meanders between two luminous spaces, enclosed by curvilinear glass.  It loops around the first one, hosting two training rooms at its center, with the flexibility of opening up to one another.  On the other side lies the second space, hosting the ‘virtual room’, with its mix of ergonomic seats, providing a more secluded area for the training workshops. On the other hand, the activities zone provides the setting for playful moments to unwind or brainstorm. All services were located on the periphery and in the basement level.

The Track is epoxy; the shade of the bank’s purple, on grey concrete floor, with zones of wood and grass highlighting each of the two enclosed spaces. The bank’s ethical statements are displayed graphically on walls along the journey. The wall treatment varies between concrete, paint, plywood paneling, and mirror treatment. Black metal frames, glass volumes, and a back-lit polycarbonate beam all add to the textures of the space.
On the upper level, open to below, an outdoor terrace was created, while part of the space is covered by a large net, providing an area for resting as well as allowing light to penetrate to the lower level. Hammocks, day beds, and couches within a spurt of green allow for a break-out moment on a roof garden in the middle of the city.
The old existing structure within the city has been metamorphosed, recreated as a vibrant social space within the neighborhood.  The design injects life into the project through the various experiences, revealing its multiple facets through a mixture of events, some planned and others informal. The project thus avoided the conventional corporate model of conference rooms around a lobby, becoming instead a creativity hub: fluid, flexible and informal. 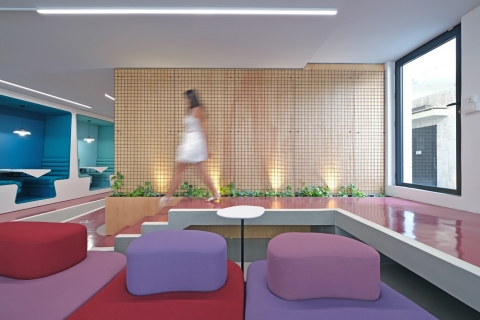 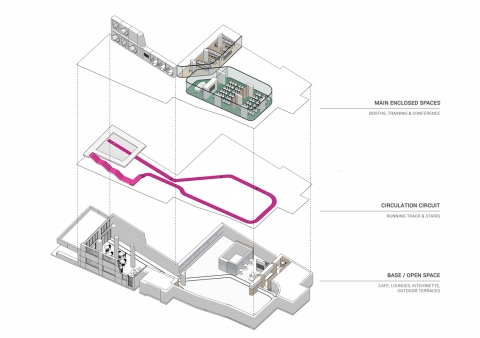 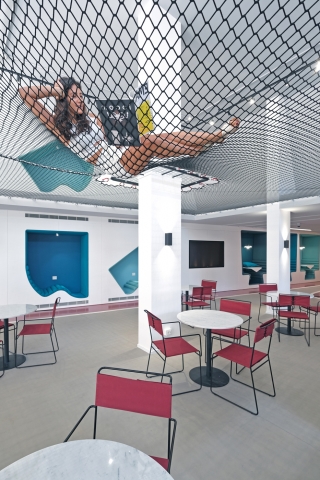 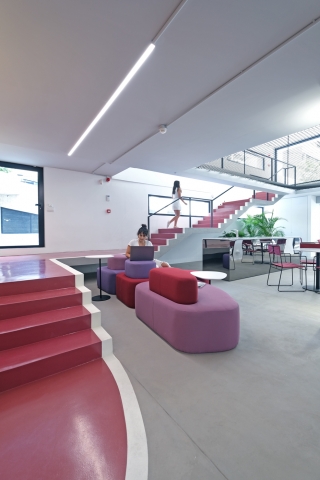 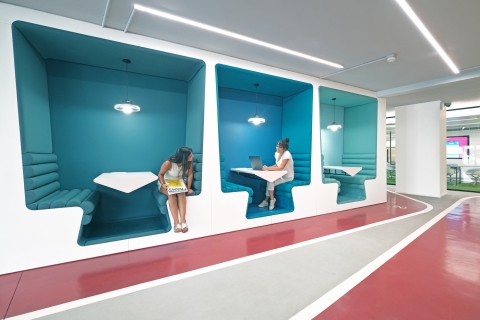 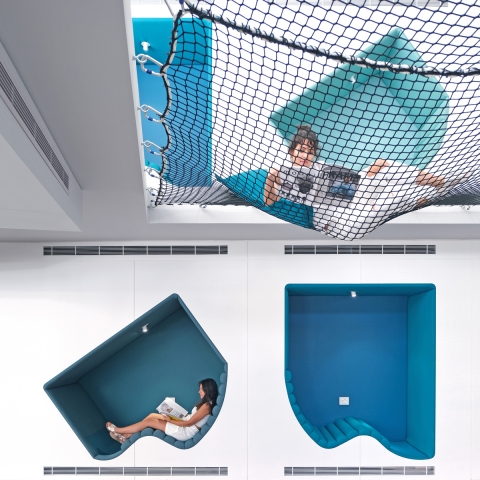 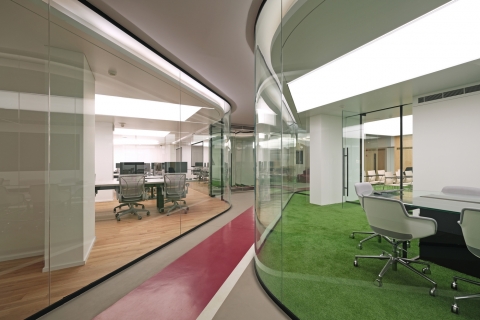 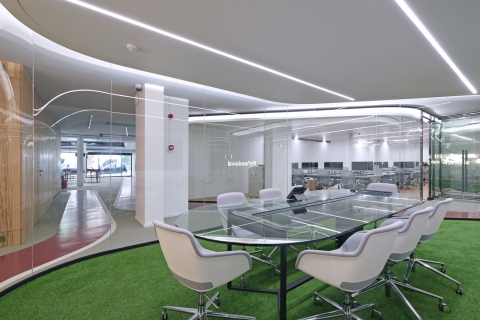 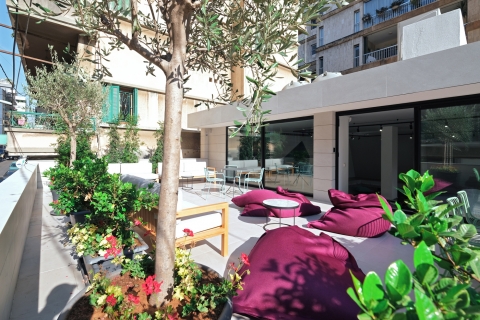