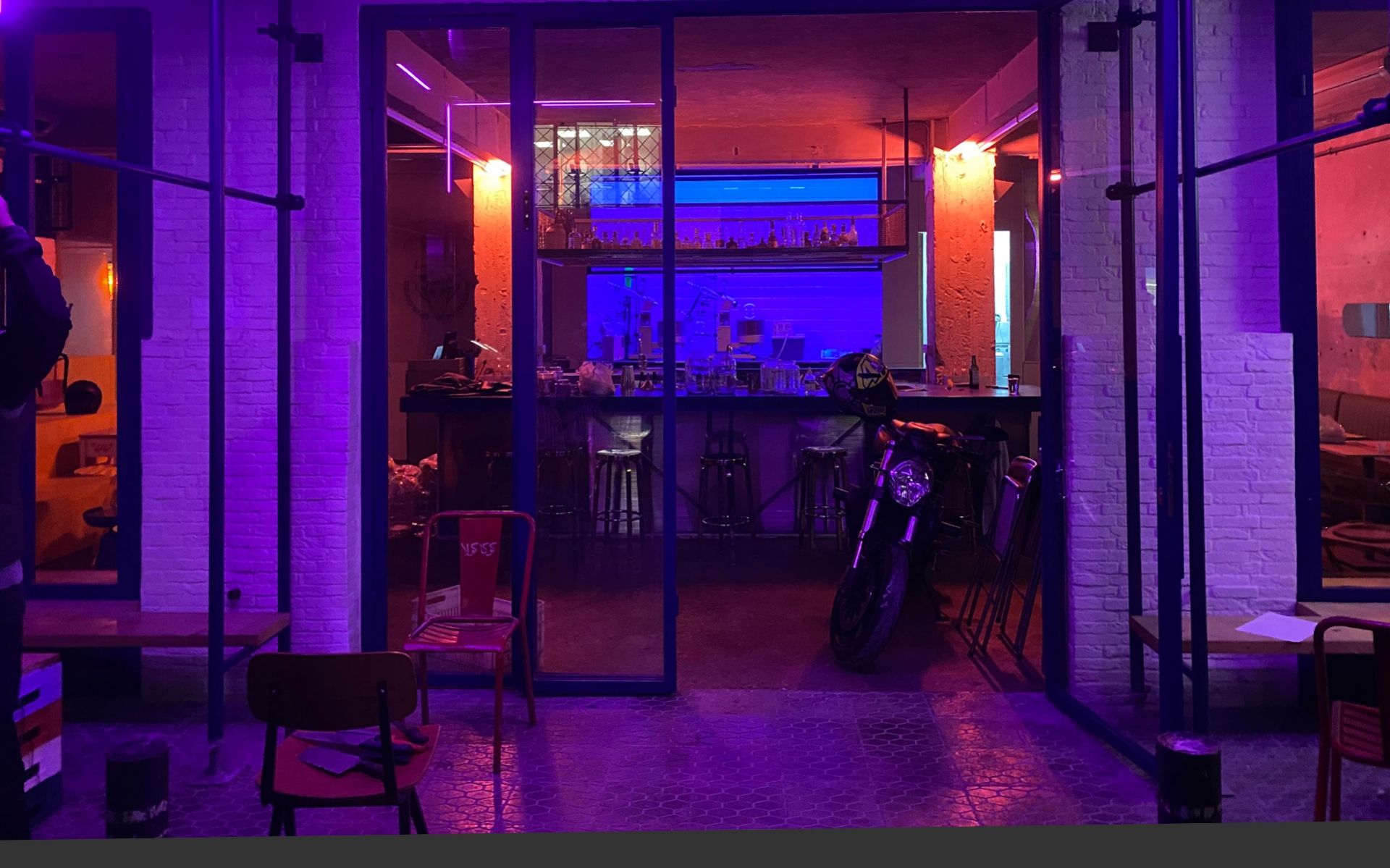 The aftermath of the Beirut explosion left the city’s hippest bar, Electric Bing Sutt, in a total state of destruction. Three months later, the conception of a new project began, resurrecting the spirit of shattered memories. This reincarnation came in the form of Dead End Paradise, a mere reflection of the resiliency of this city and its people. Located nowhere other than Gemmayze, the heart of the disaster, Dead End Paradise, an Asian tiki dive Bar with a Middle Eastern twist, is brought to life. The new location is an existing structure that lies at an actual dead-end road. The place was stripped down to its bare, most raw layer, becoming an urban canvas while preserving the existing architecture.

The intention of this project was not to recreate nor restore the original Electric Bing Sutt. Various layers came into play, telling the story of what is, what was and what will be. The new bar is a mere composition of the collective memory and aspiration for a new life. Insertions of moments and events within the space translated this collectiveness. Reclaimed items from the destroyed bar, such as furniture, were placed alongside new installations, adding one layer after the other. Openings were maximized on the street façade to blur the boundary between the indoor and outdoor; creating fluidity and porosity while allowing an abundancy of light in. An electric blue scaffolding structure was erected on the façade, melting with the “under-construction” spirit of the city and creating a new type of spatial definition. Benches installed within this buffer environment, transformed the sidewalk into an interactive seating zone.The indoor space branches out into 3 main zones. While seeping in from the outside, one comes into contact with the central bar, the protagonist of the space. Highlighted behind it is the mixology “Lab”, where most of their in-house alcohol is distilled. It is flanked by a bold color block insertion to one side, the Amphitheatre. Contrasting with the rough bare backdrop, this bright yellow, perforated mesh object redefines the conventional bar seating with its multiuse characteristic. A mobile pole dancing stage is another event that occurs alongside this volume, lighting up at night and accentuating the playfulness within the space.The third zone hosts the dining area, defined by a linear green leather bench that was reclaimed from the old bar. This added another layer of collective memory to the space. Folding plexi chairs and branded tables face the bench.

The lighting is the final-most layer, with a powerful characteristic, that sets the duality in the project. During the day, the bar is revived through pink and yellow light turning it into a playground highlighting the brightness of the boldly inserted objects; the blue scaffolding and the yellow amphitheater. At night, an amusement park play-of-light is awakened through a fusion of blue and green light inside the mixology lab and minimal lighting across the space. Purple light tubes attached to the scaffolding outside; transform the project into a futuristic, electric urban paradise. The design is realized through the use of industrial materials inside the space. The central bar is characterized by its UHPC (ultra-high performance concrete) top in an Yves Klein blue. The top sits on a skeleton steel structure overlaid by translucent polycarbonate, remindful of the outdoor scaffolding design. The amphitheater, composed from a perforated steel mesh in bright yellow, contrasts with its surrounding. Cement board & translucent polycarbonate both play a big role in the design considering their different uses throughout the bar.

Dead End Paradise is an urban experiment, whereby exploring new possibilities is immersed in the preservation of what exists and the memory of what was. Rather than abiding by the conventional norms, it is a social playground that breaks boundaries and generates new possibilities. 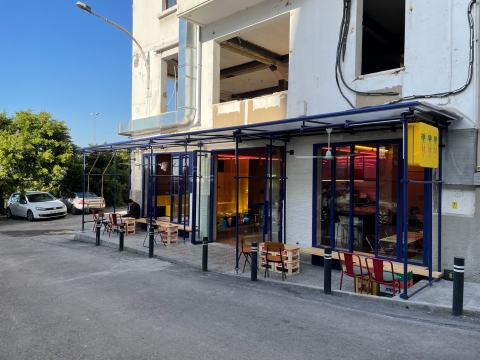 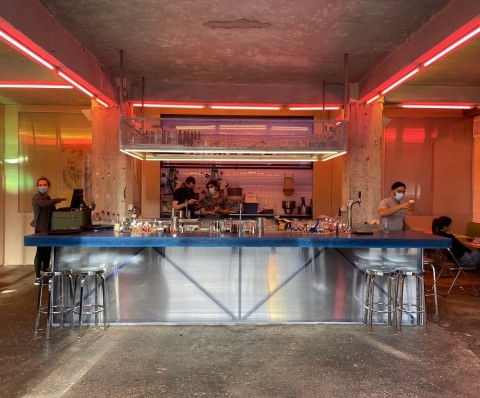 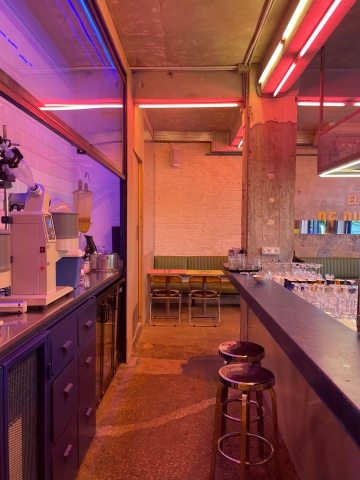 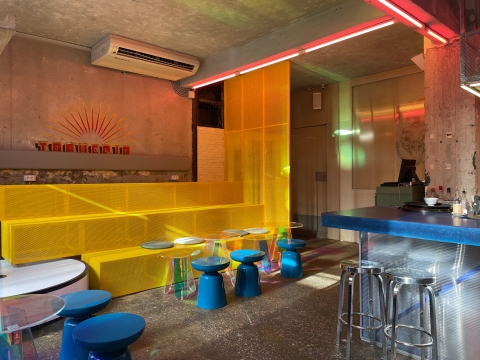 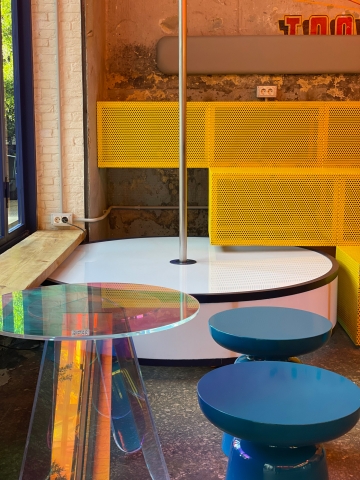 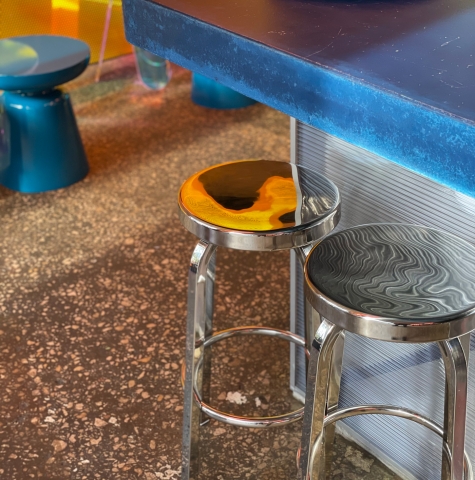 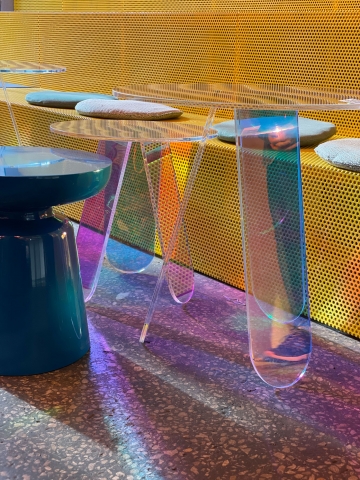 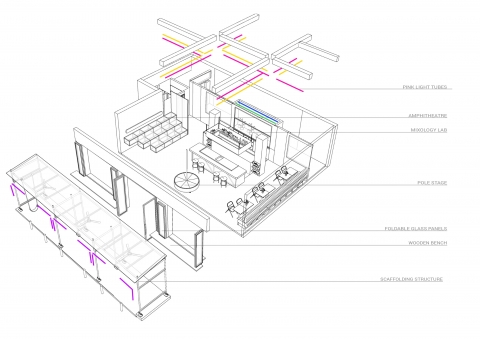 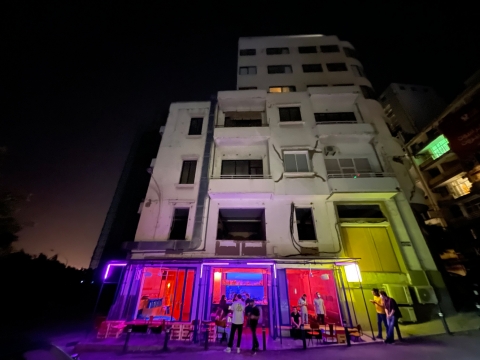 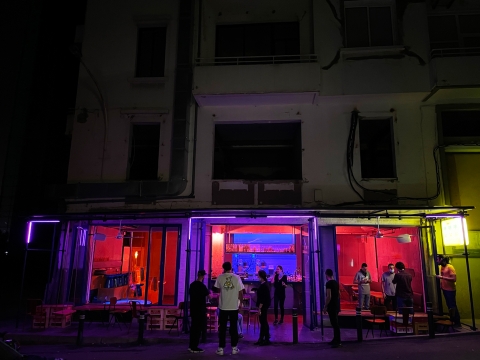 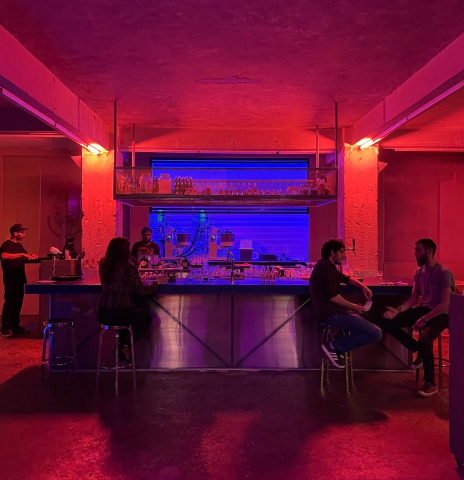 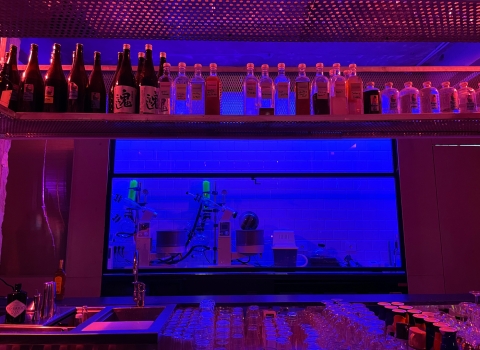 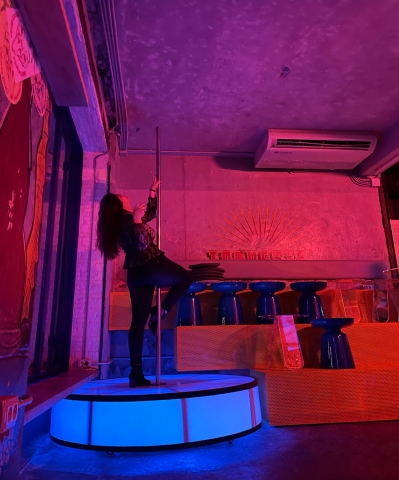 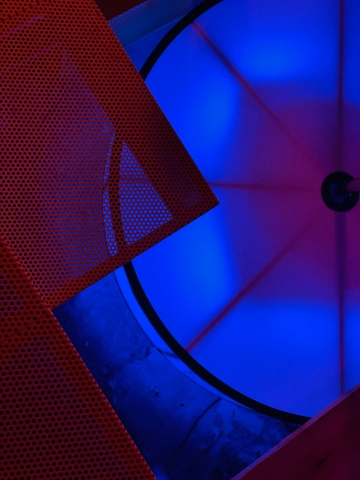