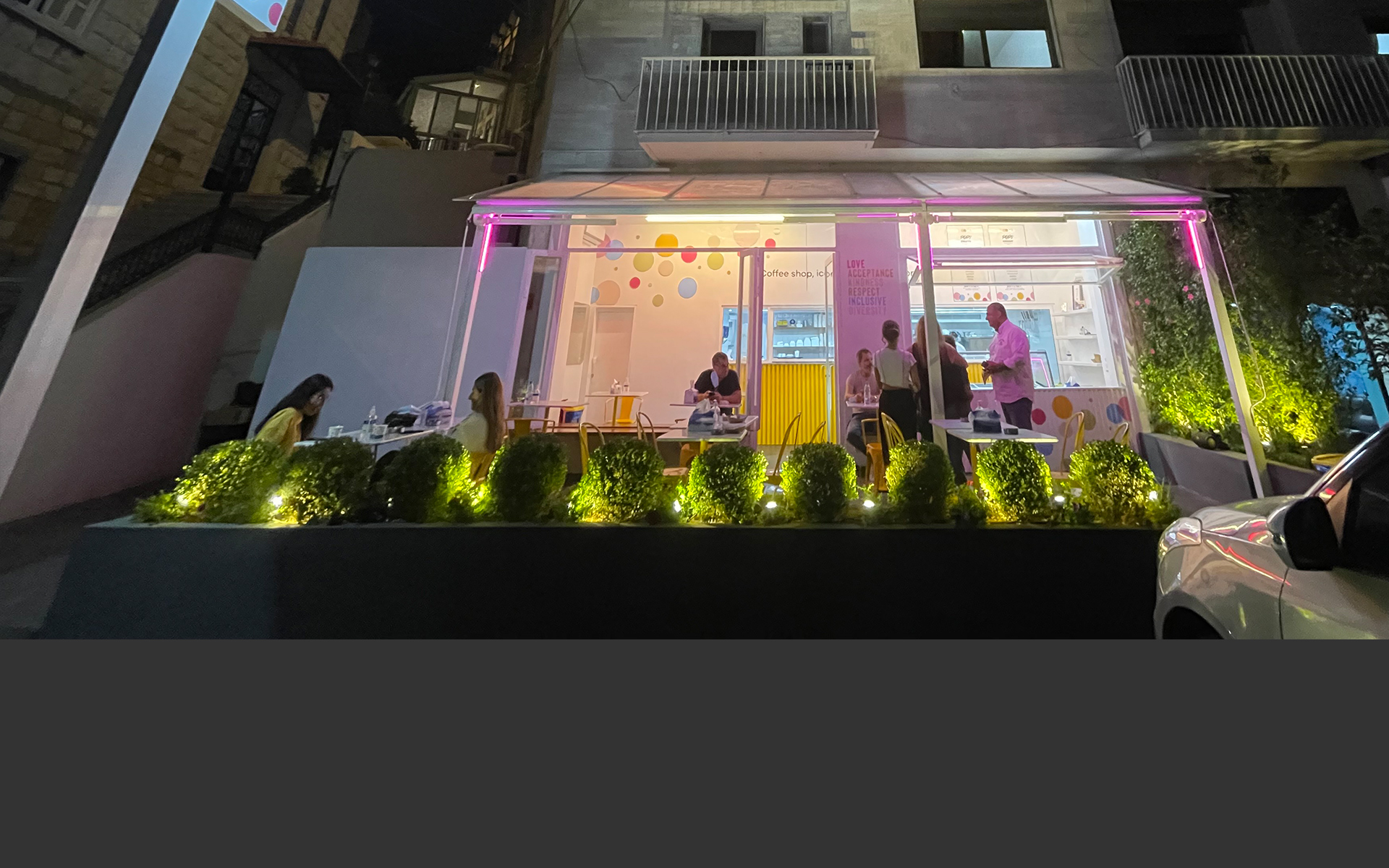 Located in the heart of Broumana, boozalb flagship store is brought to life. The new ice cream and coffee shop is in an existing area that lies on the ground floor of a residential building. The space was rethought to house new functions. Architectural typologies came into play to deliver a diverse experience. The transparency of the façade is maximized through folding panels on one side, and the Kiosk mechanism on the other. The latter is interpreted through glass panels which fold horizontally, activating the adjacent buffer zone. The left façade integrated within it a wooden bench, opens up to relax the boundary between the indoor and outdoor creating fluidity and flexibility while allowing natural light in.

The indoor space expands into 3 main zones. While coming in from the outside, one is directly attracted to the longitudinal bright yellow bar contrasting with the white surrounding. The bar, enclosed by a glass frame separates the private from the public zones. The private area consists of the preparation zone and an ice cream “Lab”. The lab, where all of the artisanal ice cream is prepared, overlooks the customer zone simultaneously creating an experience arousing all five senses. A cake display setup separates the public area into two, on one hand the seating area. On the other, the owner’s semipublic zone also known as “the kiosk” acting as a selling point for their in-house handcrafted popsicles. The kiosk is a re-interpreted nostalgic representation of the famous ice cream truck of the 1920’s.

The outdoor space consists mainly of a bench seating area and a dining tables area. Accentuating the playfulness of the space is the circular amphitheater in striking yellow situated in the left corner. Framing these elements is a polycarbonate canopy covering up the entire outdoor patio.

Multiple items were reclaimed from the previous shop such as loose furniture, a previously used marble slab, a wooden bench and corrugated metal sheets were re-introduced and modified to fit the new design. The reclaimed items helped characterize the material palette used in boozalb. As for the color palette; pops of yellow are juxtaposed into a quiet monochromatic surrounding space.

The lighting is the final layer bringing boozalb to life. The indoor space is lit with linear red and yellow tube lights, while the outdoor space is highlighted by bold fuchsia L- shape led strips simultaneously creating a play-of-light.